Being a design and marketing professional for a fair few years now, I feel reasonably justified in presenting you with my personal list of truly dreadful font ch 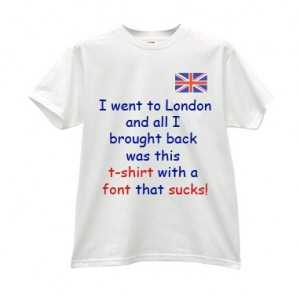 Personally, I find these fonts utterly detestable and I cringe every time I see them being used. If you regularly use these fonts then my advice is to STOP using them! I am not in the minority in my condemnation of these typographical eyesores!

1] Hobo
It’s ugly, fat, and dumb! You might be forgiven for using this font to advertise your children’s party business, or if you sell balloons for a living, but in almost any other circumstances it’s a bad font choice!

Unfortunately, I tend to see this anywhere where people want to “force” fun into their designs or literature. I can’t tell you how many times I’ve seen this font advertising a company party or get-together! Grown people (unless they’re raving lunatics) should not be using this childish and slightly manic font.

Hobo is not fun! It is a silly font!

2] Viner Hand ITC
This typeface is a sharp and pointy cursive-style typographical nightmare (based on Viner’s own handwriting). It’s the typographical equivalent of a misunderstood, stroppy teenager who wishes to appear deep and poetic!

If you’re under the age of 16 and a fan of the twilight movies, then feel free to use this whenever and wherever possible (I’m sure you already do). Everyone else should stay well clear!

3] Vivaldi
The age of romance is never dead as long as someone is using Vivaldi to signify true love! This larger-than-life, foppish-dandy of a calligraphic font just loves to be surrounded by love-hearts , sparkles, white roses, and all other Gordy graphics.

Please people! This Valentines Day, DON’T use Vivaldi! There are so many great typefaces that could replace it as a font to display beauty and sophistication. Personally, I don’t much like calligraphic-style fonts but I have used Aquiline before for a wedding invitation design.

4] Tekton Pro
People talk about how much they dislike Comic Sans – the most popular cheap and cheerful font in the world (there are even websites devoted to it’s use/misuse.) However, I think that Tekton Pro, its slightly more serious handwritten brother is slightly worse! It’s just awful!

Unlike Comic Sans, it is less “jokey” in it’s longer and more upright appearance but it has these really funky “blobby bits” all over it to signify the beginning and end of a pen-stroke! It believes that it’s fun, confident, and cool. Unfortunately, Tekton Pro is more like some aging hipster from the seventies who still thinks that he looks good wearing a 100% polyester shirt and sporting long, balding hair!

5] Algerian Mesa
Oooh! Algerian! You enigma! You’re not from my world and I don’t quite understand you? Every time I see you I’m transported to a world of magic carpets, belly dancers, sultans, and magic lamps! I’m confounded by your clumsy serifs and your “mysterious” and “evil” drop-shadow that causes dizziness and nausea if looked upon for too long!

Used frequently by carpet wholesalers and stores that sell bargain ornaments and oddments – not to be used in ANY serious design work EVER!!!

6] Papyrus.
An immensely popular typeface that’s seen everywhere from Christian rock band covers, to the latest blockbuster, Avatar! It seems to me that anytime someone wants to illustrate “ancient wisdom” or “new age’iness”, they dust off Papyrus as their font choice!

Maybe it’s because I see it used so often that I dislike it so much, but it’s probably more to do with the faux distressed and slightly “gimmicky” quality! If you want to illustrate “age” or “wisdom” with your font choice, there are far better fonts available to you (check out some of the Roman and Gothic fonts in dafont for some “ancient font” inspiration)

7] Jokerman!
Not much I can say about this fun, fun, fun font! Jokerman is a wild and crazy fool! Unless you are a company that sells 12-gallon party packs of salsa, you shouldn’t be using it!

8] Brush Script
This is my all time most hated font! I can’t even stand to look at it. If Vivaldi is the king of calligraphy fonts, Brush script is its monstrous and more powerful sibling that is kept chained-up in the basement!

I see it used all the time and it bugs the heck out of me. It’s so badly designed – the fat, short, inky lines that don’t possess any style or grace. It’s supposed to represent a loose, bold, readable, handwritten style of calligraphy! Unfortunately, all those elements have combined together to spawn a monstrous font!

My advice is that you never ever, ever, ever, EVER use this font…for ANYTHING!!! (and don’t use it’s sportier but just as hideous twin-brother “Mistral” either)

There are many other fonts that I find unbearable but I think that my list is complete (for now). I would love to hear your thoughts on these worst font choices! Maybe you have your own list, or maybe you would like to defend one of these fonts! It’s just design. It’s all entirely subjective!