Ryan Claytor is a comic book creator and Professor at the Michigan State University and the University of Michigan Flint. His autobiographical series of books entitled, And Then One Day, follow Ryan’s conversations with the various people in his life. I talked to Ryan about his work and his love of comic books. 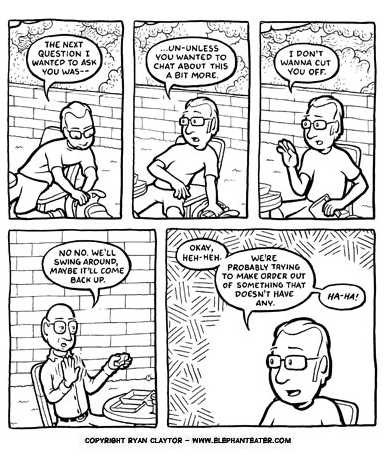 BEN: One of my earliest memories was reading Judge Dredd under my bedcovers by flashlight! I’ve loved comic books ever since. How did you fall-in-love with comic books?

RYAN: Growing up, my older brother was interested in comics, but wasn’t much interested in sharing. At that age we were pretty much sworn enemies. (Although, today is a much different story.) His friend, on the other hand, would be friendly toward me when my brother was not around. It was during one of these brotherless moments that he introduced me to Sergio Aragones’ Groo The Wanderer.

BEN: What made you want to become a comic book creator?

RYAN: I’ve always been interested in art ever since I can remember, but it wasn’t until my love of comics was rekindled at the end of my undergraduate career that I thought about drawing comics. Around the early 2000s, I started reading comics again, after forgetting about them for a good ten years. This led to more reading, which led to an interest in creating my own comics, which led to an internship at Marvel Comics in New York City in the summer of 2003. The year following my internship at Marvel, I self-published my first couple of comics.

BEN: What do you teach your students in your Comics Studio course at Michigan State University and the University of Michigan Flint?

RYAN: It’s a broad introduction that deals with the basics of creating comics using traditional media (how to use various inking tools, non-repro blue pencils, Ames lettering guides) and familiarizes students with modern digital approaches to creating comics (how to properly scan and output artwork, digital lettering techniques, computer coloring, etc.). However, comics is such a hybrid medium that we also touch on script writing, figure drawing, and even explain more comics-specific facets such as panelization, pacing, characterization, page layout, book design, various printing processes, and the proverbial more. At the end of the course, each of the students have created their own 24-page comic. The class culminates in a class-wide book signing at a local comic shop where students sign and sell the work they’ve created over the past semester.

BEN: How rewarding is it to teach students about comic books?

RYAN: Quite! I have many students who have gone on to create their own books and web comics after the class ended. Several of them are still very active in the comics community today. Yesterday a former student text messaged me that he just organized his first book signing, while many others are starting to exhibit their work at various conventions. I’m definitely a proud papa.

BEN: What were the major challenges you faced when self-publicizing your work?

RYAN: Hmm…This is a tough one, because I’m a bit of an anomaly when it comes to self-promotion, in that I kind of enjoy it. Ha-ha! I like talking with people at conventions and I enjoy organizing in-store signing tours. The tours are an excuse for me to see parts of the United States I’ve never seen before, and allow me to visit friends and family in far flung states that I wouldn’t get to see otherwise. So, I guess the biggest challenge would be not having enough money to make all my self-promotional projects come to fruition. But, as the years have passed, I’ve learned to budget, plan, and set goals. That helps the continuous process of self-promotion feel more organized and manageable.

BEN: I really enjoy the conversational style of your work. Is it hard to hold a really good conversation with someone when you’re also thinking; “this might make a great scene in my next book?” Do your family and friends ever get annoyed that their personal conversations might be featured in your next book?

RYAN: In response to the first question, it used to be a really odd process, as I was creating a page-a-day comic. Each page represented a different day from my life. That meant I was constantly living this hyper-aware existence, wondering if any particular situation would be publication worthy. However, my more recent work is a little more planned. The Autobiographical Documentary in And Then One Day #6 was transcribed from a series of interviews over the course of a year, while the current conversational arc (collected in And Then One Day #7, 8, and 9) is another transcription of a recorded conversation between an advising professor and myself. So, while I still strive to achieve a natural and informal feel to my work, my current projects are much more premeditated.

Regarding the question concerning whether my family and friends get annoyed that they are featured in my books: The reaction has been quite the opposite. Now that people close to me know I’m producing these autobiographical comics, they’ll often drop not-so-subtle hints about how they would make a great addition to an upcoming issue of my comic.

BEN: You put an incredible amount of time and effort into promoting your work – you’ve done extensive book signing tours around the country on several occasions. What are the rewards of this – both personally and financially?

RYAN: On a personal level, I must admit, I enjoy the open road. And as I mentioned before, the book signing tours allow me to see a lot of our country that I haven’t seen before. I also have friends and family scattered around the states, so it’s a chance for me to visit people close to me. Plus, I get to meet great new colleagues along the way.

From a marketing standpoint, I am trying to get wider recognition of my work. I produce a series of comics that are self-published and autobiographical, not your usual capes and tights produced by big companies. These factors require that I do a little more leg-work to promote my comics. But every grassroots connection I make with readers and retailers helps make more people aware of my art.

BEN: I’ve read comic books all my life but I’ve only recently got into reading “alternative” authors such as Daniel Clowes and Craig Thompson. Is it difficult to convince fanboys of Marvel and DC that there’s a comic book universe outside the realms of the Superhero?

RYAN: It’s true; there are readers out there who are die hard superhero fans. But, conversely, there are readers who are fervent supporters of indie comics. I fancy myself as somewhat of a fence-sitter. While I produce alternative comics, and my tastes certainly lean in that direction, I also pick up my fair share of monthly titles from the big boys. There are things to be enjoyed and learned from each subsection of the comics community. So, in answer to your question, if I can find a thread of commonality between my work and other titles, then it is easier to convince mainstream readers to give it a try.

BEN: What advice can you give to people who are interested in writing or designing for the comic book industry?

RYAN: Funny you should ask. I’ve started a section on my website called Small Press Professionalism. It’s full of tips on what to do as an up-and-coming comic book creator. I’ve written articles on how to distribute self-published comics, how to print comics for less money, tips on staying productive, and even taking on the monumental task of organizing an in-store signing tour. You can find the Small Press Professionalism articles on the resources page of my website right here:

BEN: What do you say to people who still consider comic books to be a “low art-form”?

RYAN: I think Neil Gaiman said it best. His quote went something like, “If images can be art and words can be literature, then why is the combination of the two somehow less than the sum of their parts?”