The Dark Art of Edward Frausto

Edward Frausto’s darkly beautiful world is one of robotic organisms, murderous creatures, and the fairest-of -maidens!

Edward’s artistic skill is simply outstanding! But what I find more amazing, is his weird and wonderfully macabre imagination! Although I can see glimpses of comic-book art , H.R. Giger, and even Dali in his work, Edward is a one-of-a-kind artist who has fashioned his own unique fantasy landscape. I urge all fans of science fiction and horror to visit this cabalistic and sinister realm.

(Edward’s fine art and illustrations can be viewed at the Find Art Exhibit on Sat May 8th at the Find/Eyetorrent galleries in Costa Mesa, CA. His work can also be seen at the Hive Gallery in Los Angeles) 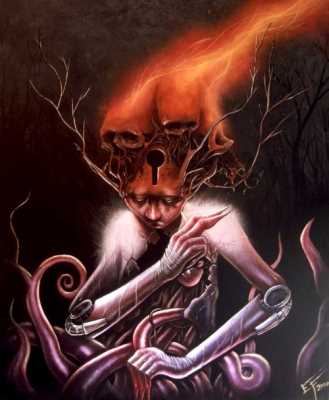 Interviewer: Take us back to your earliest beginnings as an artist?

Edward: I was eight-years-old. It was right around the time Teenage-Mutant-Ninja-Turtle-mania was sweeping the nation and they had just released the more realistic articulated rubber movie versions. I snagged as many as 20 bucks could buy me. I had about 3 dollars left over and so grabbed a pack of Marvel Universe Series 1 trading cards. This seemingly inconsequential, primal act of gathering as much as possible forever altered the course of my miniscule existence! It was the caliber of art on the cards that really got me. I didn’t actually read the comics; I couldn’t understand the subtle nuances of super-powered, costume clad beings who were running about the city saving people!?

Interviewer: Tell us about your childhood

Edward: Well, I lived a tumultuous childhood. I wasn’t afforded the luxury of blissful ignorance that most kids had! That proverbial “curtain” was pulled back early on in my life to reveal the grotesqueries of life and I was quickly made aware that people weren’t Gods, heroes, or altruistic in any sense! In my world; mom’s are heroin addicts, fathers abandon their children, cops are corrupt, the justice system is flawed beyond belief, and the country itself suffers from delusions of grandeur.

Interviewer: Where do most of your inspirations come from?

Edward: Without question from comic books! Then I’d have to say; depression, contempt for my fellow man, Black Metal, boredom, love, the fear of being irrelevant, the mind-bending works of Nietzsche, Jung, Stephen Hawking and Alan Moore. And from an artistic standpoint, I’d have to name; Alex Ross, Joel-Peter Witkin, Frank Miller, Tim Bradstreet, Mike Mignola, Jae Lee, Norman Rockwell, and Dali as inspirations.

Interviewer: How would you describe your art to a blind person?

Edward: The world is both ugly and beautiful – that’s how I’d describe my art to them. I’d tell them that it’s a balance of the grotesque-inner-ugliness of mankind and the outward-exterior-beauty that besets them.

Interviewer: What will we find you doing in the future?

Edward: I’m going to continue to sell my work in galleries. I will be a featured artist at the HIVE in LA coming up this September. I also plan to attend Comi-con this year to shop my portfolio around – hopefully I’ll get a gig doing covers for DC and maybe apply to Blizzard Entertainment. Really, I’d just like to create art and make a modest living off of it.

Interviewer: How about a great conclusion to this interview? 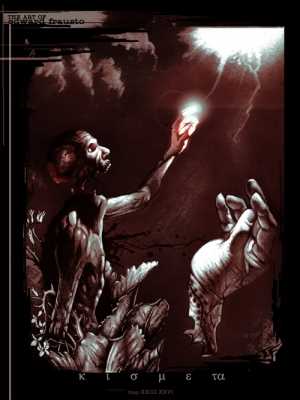 Edward: In conclusion, reality sucks! I knew this essentially from childhood and so retreated into a world of make believe – escaping into my art. In this world, the world is still messed up, but at least there are good people trying to do good things.