A Tribute to Ben Franklin

In honor of Ben Franklin’s birthday on January 17

Early to bed and early to rise makes a
man healthy, wealthy, and wise.

We all know this aphorism.  And every schoolchild knows about Benjamin Franklin’s experiment with a kite and a key.  He signed the Declaration of Independence.  His inventions—from bifocals to swim fins to the lightning rod—are legendary.   Ben Franklin created the Post Office and the circulating library.  He was a politician and the first American diplomat.

But despite all these accomplishments, he always thought of himself as a printer. Benjamin Franklin didn’t invent the printing press. He didn’t even create the Franklin Font.  But he was considered the most accomplished printer in Colonial America, and his contributions to the publishing industry are celebrated to this day.  That’s why today’s post is dedicated to Benjamin Franklin, printer, whose birthday is January 17.

An investment in knowledge pays the best interest.

Ben founded America’s first circulating library so that people could borrow books to read even though they might not have been able to afford to buy books to read.  Ben wanted to use his printing press to help people understand the world around them.

A penny saved is a penny earned.

Ben Franklin appears on the $100 bill.  He printed money for Philadelphia and some of the other colonies.  He devised the use of mica in the paper and leaf imprints as ways to thwart counterfeiters.

His most famous publications were a newspaper called The Pennsylvania Gazette and his annual Poor Richard’s Almanack. He had many new ideas for publishing and he is known for printing cartoons, illustrated news stories, and letters to the editor. He believed in the power of the press, using his printing press as a way to bring the news to all people.  He used cartoons and pictures so that everyone could understand the news, even people who had not learned to read. Ben also used Poor Richard’s Almanack to express his sense of humor.

We must, indeed, all hang together or,
most assuredly, we shall all hang separately. 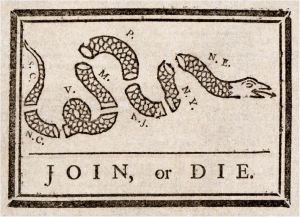 This political cartoon (attributed to Benjamin Franklin) originally appeared during the French and indian War, but was recycled to encourage the American colonies to unite against British rule.  From The Pennsylvania Gazette, May 9, 1754.

If all printers were determined not to print anything
till they were sure it would offend nobody,
there would be very little printed. 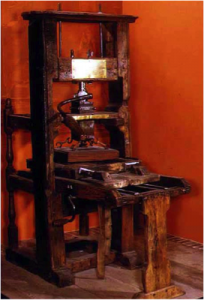 Benjamin Franklin allegedly used this English common press, now known as the Franklin Press, when he worked as an English printer’s apprentice in 1725-26.  It is on display at the Smithsonian Institution.

In 1747 Ben Franklin retired from printing and went into other businesses.  But for the rest of his life, regardless of his other accomplishments, Benjamin always considered himself a printer.  He wrote his own epitaph, which illustrates both his sense of humor and his love of printing:

The Body of B. Franklin, Printer; like the Cover of an old Book,
Its Contents torn out, And stript of its Lettering and Gilding,
Lies here, Food for Worms. But the Work shall not be wholly lost;
or it will, as he believ’d, appear once more,
In a new & more perfect Edition, Corrected and amended By the Author.

It is interesting to speculate how Franklin would have viewed the Internet, web-to-print, digital printing and waterless presses.  I think he would have embraced them, for he said,

Without continual growth and progress, such words as
improvement, achievement, and success have no meaning.