As Kermit sings, “It’s not easy being green.” Especially if you’re involved in the printing or paper industry. 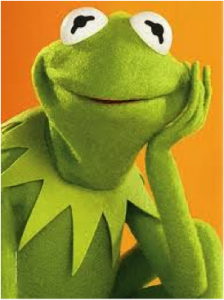 We all like white paper. It’s easier to read and easier to print on. But paper isn’t naturally white. To make paper white requires bleaching. White, good; bleaching—using chlorine, bad.

I was initially confused by the alphabet soup of claims for chlorine free paper products.  After some research I discovered the order of preference (environmentally speaking) for the various paper bleaching processes.

Again, this does not take into account other environmental considerations
such as energy usage or carbon footprint.

[Kermit is a trademark of The Muppets
Studio, LLC, a wholly owned subsidiary
of The Walt Disney Company.]

in the recycling process, but that papers which were originally bleached with chlorine or chlorine derivatives may have been used as feedstock.

Most environmental groups, such as the National Resources Defense Council consider Processed Chlorine Free to be the most preferable.

Products using the PCF or TCF labels are certified by the Chlorine Free Products Association, an independent not-for-profit accreditation and standard setting organization.

Enhanced elemental chlorine free (EECF) removes more of the lignin from the wood before bleaching, resulting in the need for less bleach. Compared to traditional ECF, EECF saves more energy, improves the quality and reduces the quantity of mill wastewater.

There are some alternatives to using bleach:

Enhanced ECF with extended or oxygen delignification removes more of the lignin from the wood before bleaching, thus reducing energy and chemical use during bleaching (the final stage uses chlorine dioxide).

Elemental chlorine-free (ECF) replaces elemental chlorine with chlorine dioxide in the bleaching process. This next-to-the-last choice is still preferable to any process that uses pure chlorine.

Worst: Elemental Chlorine
The least preferred bleaching method is pure elemental chlorine, which was phased out in the U.S. in 2001.

So, if you’re concerned about chlorine, look for the PCF or TCF logos.